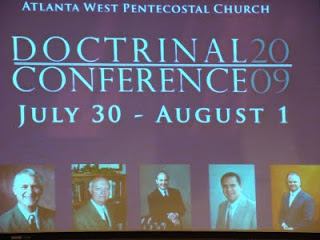 NOTE: I realize I am out of order with this post. . . I will post the second general session later today.

Pastor David Bernard began his third session with “Baptism of Water and Spirit.” What follows are my scribbles from this session.

-He pointed out that in the OT there is much typology particularly in the Tabernacle that is an expression of NT salvation. He noted that sometimes we have been accused of beating only one drum—Acts 2:38. If this is the only thing that we can identify as a point of NT salvation, then the burden is on us to find out exactly what the Scriptures are stating.

-However, the whole of Scripture emphasizes the New Birth (John 3:3-5; Acts 2:38) and every man who has an experience with God must come under the auspices of what Scripture has to say. Acts 2:38 is addressed to “every one of you.” This is all inclusive to every man, to every nation, to every race, to every tribe, and to every tongue. This is the job of the church, to evangelize the world.

-Every man at some point will have the drawing of God on his life although he may not recognize exactly who the voice belongs to.

-Both are calling for a response from man. He must respond appropriately to the call of God and if he does not, he will be lost. 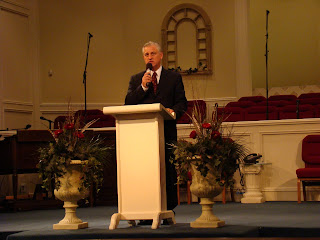 -In Acts 2:14, Peter standing with the Apostles spoke the message of the church concerning salvation. As they all stood with them, they were endorsing this message. Acts 2 presents the Gospel because it goes through the death, burial, and resurrection of Jesus Christ. Acts 2:38 is the response of the people to the message they had heard.

-What is the action of response?

-Peter was speaking to a group who knew exactly what water baptism was all about. They had heard the message of John the Baptist who had baptized by immersion unto repentance. Comparatively speaking the group at the jail in Acts 16 did not even really know God.

-Paul and Silas spoke to them at the basic level. Believe on Jesus! Turn your attention away from all the pagan gods (Zeus, Diana, etc.) that you may have embraced up until now and believe on Jesus. If Paul would have recommended that they go down to the river and be “dunked” in the water, these people would have not understood what he was trying to accomplish. However, as he instructed them to believe on Jesus, it was not long until they were ready to be baptized.

-Our salvation is by grace through faith. . . we are stirred by the grace of God and then our faith has to encourage obedience. Obedience as a response to faith leads to repentance, then baptism, and receiving the Holy Ghost.

-There are nine historical examples of baptism in the book of Acts. Other times it is inferred. It is also presented as essential to salvation. Consider again Acts 16 where they baptized in the middle of the night. There was no delay to this. In Acts 8, the Ethiopian eunuch was baptized in the desert.

-In our western culture, we divorce faith and obedience. This causes a huge disconnect because some believe that baptism is a “work.” How can baptism be a “work” when it is in response to a command given by God? Being baptized by immersion in the proper formula is an expression of obedience on the part of the seeker.

-Brother Bernard told of a woman who came to their church in the initial stages of its inception 16 years ago. She saw a small ad in the paper concerning “miracles” in association with the church. Her whole reason for coming was because she had a son who was involved with drugs and in desperate need of God. However, she was a member of a large church that did not believe in the speaking in tongues. But her desperation caused her to come to church that Sunday afternoon and she ended up receiving the Holy Ghost. There was such a dramatic change in her life that her husband noticed as did the employees who worked for her (she was an executive with a large company in Austin). When she told her husband what had happened, he then admitted that he had grown up in an Assembly of God church and as a kid had received the baptism of the Spirit. Not too long thereafter, Brother Bernard baptized this lady and then the domino effect began to work and many members of her family came in. She and her husband are now in leading the singles ministry at New Life UPC in Austin. This is an amazing testimony of what happens when desperate people are willing to be obedient to the Scriptures. God is faithful to transform their lives.

Five Examples of People/Groups receiving the Holy Ghost in Acts:

1. Acts 2—The Jews. Much time was spent on this last PM and Brother Bernard chose not to spend much time with this again.

2. Acts 10—Cornelius and the Gentiles. The Jews believed that people had to embrace God through Judaism. They would be required to fulfill the aspects of the Law, circumcision, sacrifices, etc. before experiencing the New Birth. They were inferring that entrance into the church meant embracing the Old Covenant. When the Gentiles received the Holy Ghost, this shattered their paradigm. Cornelius had an open heart, an obedient walk and God sent Peter with instructions. (Note Acts 11:16 when Peter defends the work of the Holy Ghost.) To believe on Jesus as did Cornelius and his household, they expected to be baptized and to receive the Spirit.

3. Acts 19:6—A strong precedent in that this was not a large group (as the Jews in Acts 2) or another nationality (Gentiles). There was no “big” reason for them to speak with tongues. They were simply a local church (disciples of John) who wanted to be obedient.

4. Acts 8—They received the Holy Ghost but in this case the Bible does not state clearly they spoke with tongues. However there is a betraying factor in the passage with the appearance of a shady magician named Simon who wanted to buy the ability to lay hands on people. Why would he want to buy something that was merely an expression of joy? This is not what he wanted. He wanted the ability to lay hands on people and then they would begin to speak with tongues!

5. Acts 9—Saul’s conversion. Again no specific reference to speaking with tongues. However when we look to 1 Corinthians 14:18 it becomes obvious that Paul spoke with tongues frequently.

Some have sent me e-mails requesting how to get the materials from this conference.
The address: