A Day In Gainesville -- Formula For a Downpour 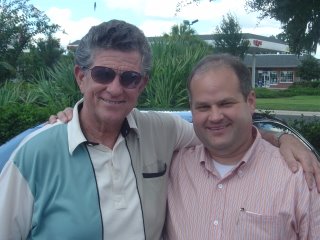 In yesterday’s post, I wrote about our trip last Tuesday (September 5, 2006) to to visit with Pastor Jeff Arnold. I have already written about what he termed the “five-year pass.” It was recounting some of his early days in and some of the things that he had to personally overcome.

I have written on the BarnabasBlog about the impact that several men have had on my life and ministry. One of those men is Anthony Mangun who pastors in . Since 1983, a conference convenes in called Because of the Times. Over the last 20+ years it has been responsible for a lot of good things among the and has greatly contributed to a lot of personal growth among revival-minded men. Bro. Arnold is one of the mainstays at BOTT and has preached there every year since its inception. 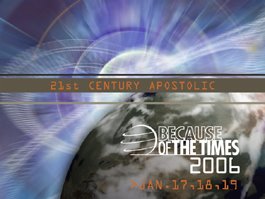 Because of the powerful change that has occurred in me over the years, I was curious as to how Bro. Arnold got involved with BOTT. When he was telling us about his initial encounter with Anthony Mangun, Bro. Sims and I laughed at another of Bro. Arnold’s “dilemmas.”

Bro. Arnold said that he went to General Conference in 1982 (which would have been the fall before the first BOTT) and standing outside the doors were Bro. Mangun and Pastor Mike Williams from . Bro. Arnold said that he knew Bro. Williams but did not really know Bro. Mangun. They were both passing out small flyers with the dates and a brief explanation about what BOTT was about.

Bro. Arnold said he looked at Bro. Anthony, then he looked back at the flyer, looked back at Bro. Anthony and then back at the flyer. He then looked up again and asked him, “Do you know who I am?” Bro. Mangun replied back, “No not really, but the Lord told me that you are supposed to preach the closing service!” Bro. Arnold said, “Must be some mistake. . . Do you know how many I had in Sunday School last Sunday?” Bro. Anthony said, “No. How many?” Bro. Arnold said, “62!!!! And I see on this list that you have yourself, Mike Williams, Vesta Mangun, T.F. Tenney, James Kilgore, Wayne Huntley, J.T. Pugh, and some others. I am not even in the same boat with all of these fellows. And you want me to come preach?” Bro. Anthony said back to him, “Yep, the Lord has already spoken to me about it!”

Bro. Arnold told us then that he had never felt so unworthy as he did at that moment. He told us that he showed up at that first BOTT and he said he was nervous, excited, and felt the full swing of emotions on either end of the spectrum. He also told us that he was so intimidated by all of the “big” ministries that were surrounding him. He said that he went to his motel room and started begging God to give him something to preach.

He did not tell us the content of that first message but he did give us the title, “Formula for a Downpour.” He said that the rest of it is history. He related to us that every year, he tries to beg off from preaching and just wants to be there for the conference but Bro. Mangun won’t let him off the hook. He did tell us that he had gotten into some trouble for rubbing the cat’s fur the wrong direction a few times (I am saving that story for another post). But all in all, BOTT was something that launched Bro. Arnold’s preaching into a lot of younger minister’s lives.

I asked him if there were any that really stood out to him over the years and he mentioned, “Miracle Looking for a Vessel” and “Coming Out of A Cave.” He also mentioned “Refuge from Despair.” As he was telling us how that God gave him that message, there was an incredible touch of the Spirit that I felt in Sonny’s BBQ in .

He also told us that the message that has probably helped more people than any of the one’s that he preached in the BOTT venue was “I Will Not Die In My Dilemma.” I am going to use both of those messages to write about in a few days.

As for Bro. Arnold’s preaching, the Pentecostals of Gainesville website has a new catalog that will provide all sorts of inspiration if you are a minister. It has over 2200 messages that are available for purchase. I got an incredible rush of inspiration just rambling through all the sermon titles that are listed.

Bro. Sims’ was once in close contact with the fellow who ran the sound equipment in Gainesville. This man was also responsible for the tape ministry. Bro. Sims has a a series about Abraham that contained 29 messages. In that series Bro. Arnold basically preached through the life of Abraham and took his initial text from Hebrews 11:8-10. The series title is “In The Steps of That Faith." The actual messages of this series are listed under the "teaching series" at the website.