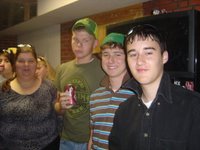 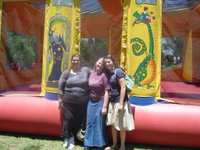 Wow!!! That is what describes the beginning of this second day at the ol’ Campground. The day 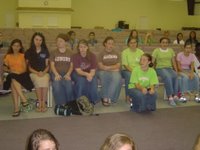 actually started deep in the heart of the night. At 3:24 AM in Dorm B (I know I looked at my clock on my cell phone), I was awakened by several muffled laughs and giggles coming from the other side of the room. Upon investigation with a trusty Mag lite, I discovered that several of the laughs were from Robbie, Ron, and Justin who heard Michael Joyner talking in his sleep.

But it also appears that some concurrently in the building at the same time that Dorm D, where 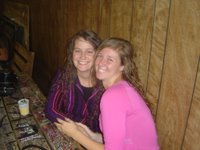 our girls were staying, that a much greater mayhem was occurring. It appears from several reports that the girls and the Eva girls were involved in near “high crimes and treason.” Anyway, whatever it was that happened caused them to have to eat breakfast last. Upon further investigation, it appears that it was nothing more than just girls doing their normal things (so parents rest easy) like talking and laughing deep into the heart of the night. Note the picture of the supposed ringleaders to the right. I personally could never believe that these two could would be involved in such, please especially note the “innocence” displayed in their smiles.

My day started at 5:45 AM, I managed to take a 17 ½ mile little jaunt on my bike through the community and surrounding area. I saw two wild rabbits, several incidents of road kill, several hundred cows, and very few cars. One of the good things that happened was the Rottweiler that pursued Mark and I two years ago on the same series of road is either dead or asleep and he did not chase me this morning. I did not realize that Bro. Neal Williams had his bike here or I would have invited him along, but he is going to ride with me tomorrow.

We managed to get the campers rolling around 7:30 AM and after breakfast the day begin in earnest. We started a split session with the guys and girls and in the guys room a panel discussion about odds and ends of living for God was engineered by Youth Pres Neal Williams, Youth Sec Sammie Sherrill, and two youth committee members, Sean Meeks and Mike Thomas. I am unaware of who chaired the session for the girls. 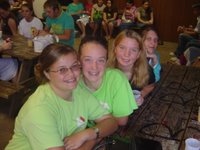 Once the split sessions concluded, we all met for a general session with Bro. Todd Gaddy who is the National Youth President of the UPCI. He focused his message of John 3 and primarily helped us to understand that we are “Bright Lights.” He did pull from the crowd our own Jeremy McCoy to field his “football team” and changed Jeremy’s name to “Bubba” who was one of his offensive linemen. Jeremy (aka, Bubba) did a fine job and represented us well. It has a lot to do with his leanings.

God has deemed our days and He directs our paths. There was a strong encouragement at the end of his message for involvement in a youth overseas mission trip. It is attainable and it is do-able for the youth of this generation.

The rest of the afternoon was spent playing football, softball, volleyball, basketball, and for the choir members, practice.

I do have some quotes from the Dothan Gang.

The ministry of Bro. Tiller was again challenging as he preached from Revelation 5:1-9, 13 about “Redemption’s Song.” The crux of this message is that we have been saved from the clutches of the devil, from sin, and from it’s consequences. He emphasized a necessity of worship, relationship with the Word of God, and with holiness. The altar service was fantastic and our “kids” responded just like they do at home, with fervent, heart-felt desire. I laid my hands on as many of them as possible and prayed the God would bless them and keep them from the disasters of this world.

As I listened to Bro. Tiller preach, it was further established in my mind how crucial it is for our church in to continue to love God, love the apostolic doctrine, love the apostolic lifestyle, and serve God with diligence. It is imperative that we as parents, as a church, and as the family of God continue to help them to make it to Heaven. There is an incredible heritage that we MUST continue to walk in no matter how dark this world may get. It is crucial that we lay aside every weight. . . .